How Swimming Has Changed Over the Years 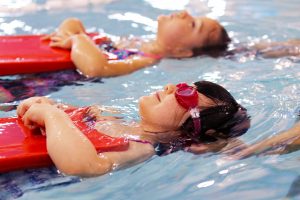 Did you know that swimming can be dated back to the Stone Age? Prehistorically, swimming was essential in order to cross rivers and lakes – as indicated in ancient cave paintings from Egypt which depicted swimmers. According to Archaeological and other evidence, it is safe to say that swimming must have been practiced as early as 2500 BCE in Egypt, Greek, and Roman civilizations. In Greece and Rome swimming was a part of martial training and was also part of elementary education for males. By the 17th century an imperial edict had made the teaching of swimming compulsory in the schools. Organized swimming events were also held in the 19th century before Japan was opened to the Western world. It is believed that during the prehistoric era swimming was evidently learned by children about the same time they walked, or even before! However, swimming was not widely recognized or practiced until the early 19th century, when the National Swimming Society of Great Britain began to hold competitions.

The lack of swimming in Europe during the Middle Ages is explained by the fear by the locals that believed swimming spread infections and caused epidemics. Today, swimming is not only a recognized sport but has also become tremendously popular for leisure. Pools are almost everywhere; hotels, inns, private associations, apartment buildings, condominiums, commercial operations, schools, and universities. Over the years, water theme parks with rides, slides, and artificial waves began to attract large numbers of thrill-seekers. Just as the number of places for swimming increased, so did the kinds of activities that people enjoy in and on the water: boating, water skiing, snorkeling, scuba diving, fishing, and an unlimited number of games – tag to water polo became increasingly popular.

This introduction of new activities shifted the purpose of swimming from being a necessity for survival to being a recognized sport and eventually also an activity for leisure. The variety of relaxing water pastimes, such as hot tubs, saunas, and whirlpools often located at or near swimming facilities, also started to grow in popularity. Leisure swimming also added great social value. Family and neighbourhood ties are strengthened by weekends at the beach, vacations by mountain lakes, pool parties, and just having the neighbourhood kids over to use the pool.

Several decades ago, the idea of’ swimming’ simply didn’t last long. Normally you would be done with swimming when you completed college. It was practically unbelievable and unheard of to be swimming in your mid-20s. Today, it is highly encouraged to keep swimming as a continuous activity because not only is it a lifesaving skill due to the prevalence of water and pools as described above, but it also has many health benefits! Swimming has been called the “perfect” exercise. After all, you can get all of the benefits of an aerobic workout without having any damaging impact on joints, and it can be done by all ages! Swimming offers a way for athletes to stay strong and keep fit when recovering from an injury, and there is no fancy equipment needed! All in all, swimming has many more benefits that those obvious advantages seen on the surface; its improvements to overall health go much deeper.

As the popularity of swimming increased rapidly, so did the advancement of training items and equipment. During the olden days, pocket drag shirts were a popular choice to use during swimming. These shirts were worn while swimming, and had open pockets all over chest and back, with plastic inserts in each pocket that bowed open. However, they added so much resistance that speed was slowed enormously, and all the extra strain was taken on the shoulders. Wherever they appeared, shoulder tendonitis soon followed.

Sometimes children can be hesitant with the idea of learning to swim and being in a large body of water. However, we believe that this is completely normal and we do our best to make all of our swimmers comfortable by teaching using a smaller steps philosophy which means breaking skills down into three to five steps. This allows swimmers to master things one small step at a time, we help propel your child forward by keeping them motivated and preventing them from getting discouraged. It also helps show your child that most things don’t happen overnight. Real success comes from practice, consistency and sometimes patience. In recent years, you’ll have seen lots of equipment at our pools which have proven to greatly assist our newer swimmers in developing confidence in their skills. Nowadays, kickboards, pull buoys, paddles, and floaters have been proven to be very efficient, especially when someone is learning how to swim which has only helped enhance the experience for swimmers!

The concept of having a “swimsuit” did not exist historically. This is obvious because back then swimming was only for survival so the idea of having swim suits wasn’t even close to being born. Back in those days, it was especially harder for women to find something to wear for swimming since they were compelled to conceal their bodies in order to be “modest.” The clumsy Victorian-style bathing costumes were quick to become a burden. A need for new style bathing suits that retained modesty but was free enough to allow women to engage in swimming was obvious.

Only at the turn of the century, when swimming became an intercollegiate and Olympic sport, did people realize that the current swimwear lineup had been designed without functionality in mind. As time passed swimsuits became more streamlined and less heavy, paving the way for more styles to come. As we know today, swimming styles and suits have expanded greatly and are part of a booming business! In fact, some of us are still looking for that perfect swimsuit even today!

With freedom in water comes safety and responsibility! As swimming became a normalized activity, there was a realization that people should also be aware of the possible risks and should be encouraged to follow rules in order to prevent any accidents. The way we swim today is different than the past generations who did not have much knowledge about water safety and drowning prevention techniques. Historically, there weren’t established swim lessons or schools or much information on this topic. Therefore, the way information on correct techniques and safety procedures was addressed drastically and changed how swimming was perceived over the years. These procedures, precautions and policies associated with safety in, on, and around bodies of water really helped push the notion of swimming as a sport and recreational activity forward. Safety First is a core value of ours, and is integral to our Learn to Swim program development. Our lessons help condition our swimmers on safe ways to behave and interact with the water. Drowning is the leading cause in preventable death for children aged 1-4 in Canada. This is why we are strong believers that children are never too young to begin building safe habits in and around the water that will last a lifetime. Our classes are divided into two levels based on ability, so each class is tailored to what you and your experience level is in the water. We do our best to make sure that we help you with every step of the way!

We’re grateful for the important role we play in your child’s life and we believe wholeheartedly that the keys to swimming success are the same as those required in many other areas of your child’s life. Making Waves has taught swimming lessons for over 25 years and the trends and developments that we just learned about has really helped shape what our program is today. Swimming has really become the gateway to overall fun with the water and we are so happy to help inspire a positive change in children’s lives!